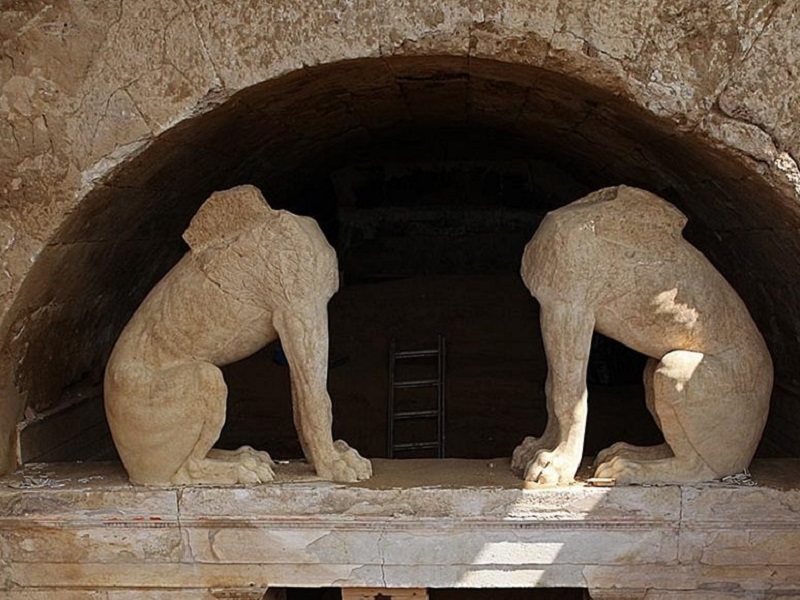 Amfipoli is an ancient city build in eastern Macedonia, on the banks of the river Strimonas, in the place of the city once called Nine Roads (Ennea Odoi) or very near.
Amfipoli was founded by the Athenians in 437 B.C , whose main goal was to control metal production of  Thrace, but it fell into the hands of Spartans, during first phase of the Peloponnesian war, in the periodof 431-421 B.C.The Peace of Nicias in 422 B.C. foresaw surrender of the Amfipoli to the Athenians, a promise that was never fulfilled. Subsequently, Amfipoli remained under influence of the Spartans. The last effort of   Athenians to regain the city , failed in 358 B.C. , and in the year that followed it was seized by Philip, father of Alexander the Great, and it became part of the Kingdom Of Macedonia.  After the fall of the Macedonian Kingdom (they were defeated by the Romans), Amfipoli once more “changed hands” and it became part of the Roman Empire. A famous Egnatia Road (Via Egnatia in Roman times) went trough the city, that  enabled Amfipoli to develop significaly and to grow . Economy was at its peak, and the proof of that are the size and the decoration of the city’s churches in 5th and 6th century A.D. After the invasion of the Slavic tribes, on the end of the 6th century A.D., Amfipoli was stadily deserted, till the point when it was abandoned completely in the 8th century, when the most of its inhabitants left
to settle to the nearby city of Ionas. The city was renamed Hrisopolis  by the Byzantines. In the area today, a new and modern settlement ( that has the same name)  was built, and it is situated  60km southeast of the city of Serres.